“The Village Where I Went To School”

The village life, and every care that reigns
O'er youthful peasants and declining swains;
What labour yields, and what, that labour past,
Age, in its hour of languor, finds at last;
What form the real picture of the poor,
Demand a song — The Muse can give no more. (George Crabb.)
For most of the twentieth century the village of Lacken, in west Wicklow, would conjure up images so vividly portrayed by many poets.
“Behan’s Bush” across from the shop was a meeting place where pitch-and-toss was played and information exchanged.

The hawthorn bush, with seats beneath the shade,
For talking age and whispering lovers made!
How often have I bless’d the coming day,
When toil, remitting, lent its turn to play,
And all the village train, from labour free,
Led up their sports beneath the spreading tree!
While many a pastime circled in the shade,
The young contending as the old survey’d;
(Goldsmith.)
The forge, where generations of Tippers worked as blacksmiths in the family business is now deserted. Johnny Tipper who died more than forty years ago was the last one of the family to practice the craft there. No doubt it was a similar establishment that inspired this poem:

The Forge All I know is a door into the dark.
Outside, old axles and iron hoops rusting;
Inside, the hammered anvil’s short-pitched ring,
The unpredictable fantail of sparks
Or hiss when a new shoe toughens in water.
The anvil must be somewhere in the centre,
Horned as a unicorn, at one end and square,
Set there immoveable: an altar
Where he expends himself in shape and music.
Sometimes, leather-aproned, hairs in his nose,
He leans out on the jamb, recalls a clatter
Of hoofs where traffic is flashing in rows;
Then grunts and goes in, with a slam and flick
To beat real iron out, to work the bellows. (Seamus Heaney.)

On each Bank-holiday evening the schoolhouse, let by a Tilly-lamp, would become a Ballroom of romance where,

The dancing pair that simply sought renown,
By holding out to tire each other down;
The swain mistrustless of his smutted face,
While secret laughter titter’d round the place;
The bashful virgin’s side-long looks of love;
Still let thy voice, prevailing over time,
Redress the rigours of th’ inclement clime; (Goldsmith.)
The first “public” phone in our area was installed in the early fifties in the Post Office in Lacken where most of the calls were to the Priest, the Guards, the Doctor, the Vet or The A.I. man (or “the collar-and-tie-bull” as he was known.) Not quite the stuff of Charles Bukowski’s poem:

The telephone
will bring you people
with its ring,
people who do not know what to do with
their time
and they will ache to
infect you with
this
from a distance
(although they would prefer
to actually be in the same room
to better project their nullity upon
you).
The telephone is needed for
emergency purposes only.
The Post Office was also a shop which opened late so nocturnal communications pertaining to illicit relationships could sometimes be conducted, albeit in whispered tones. (Or so I’m told.)

Lacken eventually got a Phone-Box and conversations could be carried out in a stentorian voice without fear of “ear-wigging.” Some “coins” used were not Legal Tender (or even legal.) Washers of a certain diameter and “push-outs” from galvanised junction-boxes, used by electricians, would suffice. (Or so I’m told.)

By “tapping out” the numbers on the top of the cradle (1,9 and 0 were free) one could get through to any number. (Or so I’m told.)

Another favourite trick was to block the return-chute with a piece of rolled up twine and to return for the proceeds when a number of people had pressed “Button B” without getting any refund. (Or so I’m told.)

When a not-too-well-liked person would be retiring it would be said, “They’re holding his retirement do in a phone-box”.

On one occasion, a female, from a neighbouring parish, who was presumed to have contracted a “social disease” used the phone and civic-minded local woman immersed it (the phone, not the female caller) in a bucket of Jeye’s Fluid. This caused a malfunction which the P&T engineer couldn’t find a cause for.

The Post Office was moved to a private residence in 1970 and eventually thanks to the powers in Dublin it eventually “fell to progress.” Like many another village in Ireland Lacken was now without a Post Office.

Down, down they sink, and spread a ruin round.
E’en now the devastation is begun,
And half the business of destruction done; (Goldsmith.)
Lacken Schoolhouse was built by Lady Smith of Baltyboys House in the eighteen eighties. In the initial application to the Commission of National Education for aid towards Lacken School, as we know it, on 12th June 1868, it was stated, “Mrs. Elizabeth Smith, widow, owner of the property at Lacken, purchased by her in the Landed Estate court, will give a lease for sixty years, and vest the site in the Commissioner of National Education, attendance of children expected between sixty and seventy at present area school room considered sufficient.”

On 16th November 1916 Lacken School was “sold” to the people of Lacken and the precincts thereof, for the nominal purchase price of £5, by Elizabeth Graydon Stannus, granddaughter of Mrs. Smith and mother of Edris Stannus who was destined to become the world-famous Dame Ninette de Valois.

A new school was built in 2010 and the old schoolhouse, no longer houses the moulding of the minds of the young and is now a community centre but,

The cloakroom pegs are empty now,
And locked the classroom door. (Philip Larkin.)
In October 2012 Tommy and Maureen Richardson turned the key in the door of their shop for the last time. This was the shop where, in the early days of Telefis Eireann we would assemble at night to watch The Virginian, Batt Masterson and The Avengers.
And now we are at the mercy of:

Shopping malls where
people gather,
shop, then go
crazy.
(James Foulk.)
We can’t stand in the way of progress and tomorrow is just as important as today. But when the fibre of a community is rent asunder what is to be done? 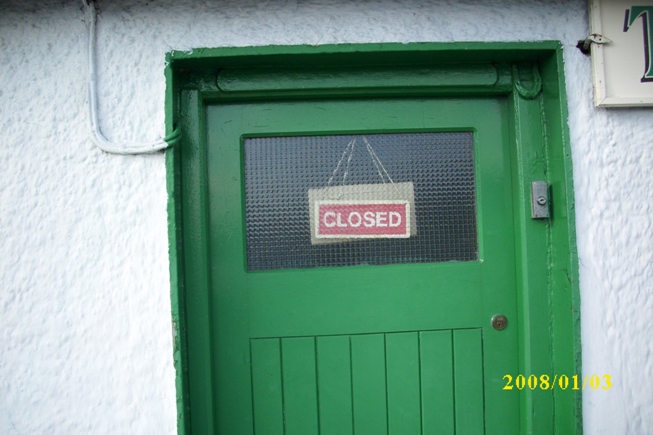 The members of the Lacken Community Development Association are doing their best to ensure that Lacken doesn’t become a deserted village. They need all the help they can get.

Billy Keane's latest novel is a must-read. I won't say any more about it; Google it. Billy is a columnist with the Irish Independent. The son of John B. Keane, he runs the world-famous John B. Keane’s pub in Listowel in his native County Kerry. His previous books include the novel The Last of the Heroes and Rucks, Mauls and Gaelic Football, which he co-wrote with Moss Keane.