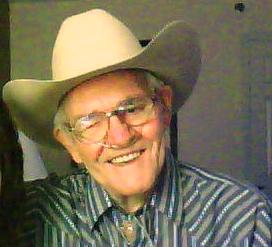 Seems like a while back I had a recipe from the days of cattle drives and how the range cook had to make do with what was at hand. Even told about my great, great, grandfather's buffalo rustlin' uncle, Billy Bob, might not a' been his real name, but then my great, great, grandmother never brought up the name in family circles. I only knew of him from pictures of a hangin' tree, that some of my aged fore bearers referred to as where one of the black sheep of the family got hung for buffalo rustlin' whatever. Might'a even been Roy Bean standin' by it. Story goes that great, great, grandpa was a cattle drive cook way back when.

Well, I don't know how far back when, and I am sure he never had a recipe book or even had the ability to write. But, from stories that was handed down over the years, he must have been a pretty good cook. Well, he had to be, as I hear it now most a' them range cooks never lasted through the first drive if they wasn't good cooks. Seems, he lasted a lifetime, or at least the stories never end. Any way here is one of his recipes that some ancient cowhand had written down on the back of Uncle Billy Bob's wanted poster (he was worth a thousand bucks back then), and I found it in grandma's recipe collection, wherever. Necessity, and my great, great, grandfather, probably invented this method of makin' tough old steers, tender tastin' tidbits. As I said, along the trail, ol' cookie had to use what was at hand, and surely he would never be allowed to use a steer that was worth any money. If he killed one of the cattle, it was probably one of the old, lame, and about to fall over, that had to be shot before it died on the trail. So ol' gramps had to use it up to feed the hands, and thus he came up with Range Style, or Texas Style, Chicken Fried Steak. Sort of a fancy name put forth to please the palate in spite of a dead issue.


So here is a recipe for Chicken Fried Steak.

And here is what you will need for 4 servings:
Get a nice fairly thick sliced round steak, cut away any fat and remove any bones, pound it with the rough side of your meat mallet to tenderize it. Slice it into 4 nice pieces. Salt and Pepper on both sides and set it aside while you do this. Beat an egg with about 2 tablespoons of milk until frothy.
Now dredge each piece of meat in flour, knock off excess
Dip into the egg mixture, and then back into the flour.
Now set it aside so that coating will set.
You do not want it to come off in the skillet while it is cooking.
Meantime get your cast Iron skillet with its tight fitting lid and heat up some bacon grease.
About an inch of grease in the pan will take care of the 4 pieces of meat.
Get the grease hot enough so that when you shake a few drops of water into the grease it will spit back at you. That should tell you it is hot enough to start cooking the meat.
Gently add the meat and cook it till it is a golden brown on both sides.
You should only have to turn it once.
Remove the meat and pour off any excess grease in the pan, add a few tablespoons of water (gramps said coffee, but that's all he had, water holes were few and far between), return the meat to the pan, cover it, with its lid and let steam for at least 5 minutes.


There you have it, 4 nice pieces of grandpa's Range Style Chicken Fried Steak. And now for the cream gravy:


Don't clean the pan. Use a bit of butter to melt in the pan and scrape loose all the tidbits in the pan, sure they stay in the pan, just make sure they are loosened from the pan. Pour in a cup of coffee cream, and any flour left from coating the meat, dump that in and heat and stir constantly until you have a thick creamy gravy. Cut the heat when the gravy thickens so as not to burn it. Spoon that over each piece of meat and serve.

Mashed potatoes and any green veggies with a salad will go well with this... An' some of grampa's home brew was a good thirst quencher.

Click on Leocthasme  for bio and list of other works by Leo C. Helmer published by Pencil Stubs Online.