ALWAYS LOOKING – People Who Made A Difference XIV

John Muir - farmer, inventor, sheepherder, naturalist, explorer, writer, conservationist, was one of the earliest advocates of the national park idea and its most eloquent spokesman. He was born on April 21, 1838 in Dunbar, Scotland. In 1849, when Muir was still a boy, the Muir family emigrated to the United States, settling in Wisconsin. Muir's father, a harsh disciplinarian, worked his family from dawn to dusk. But whenever they were allowed a short period away from the plow and hoe, Muir and his younger brother would roam the fields and woods of the rich Wisconsin countryside. John became more and more a loving observer of the natural world.
After three years at Wisconsin university, where he studied botany and geology, Muir left Wisconsin to travel the United States and Canada, odd-jobbing his way through the yet largely unspoiled land. Eventually he walked a thousand miles from Indianapolis to the Gulf of Mexico, then sailed to Cuba and later to Panama, where he crossed the Isthmus and sailed up the West Coast, landing in San Francisco in March, 1868. From that moment on, though he would travel around the world, California became his home.

It was California's Sierra Nevada and Yosemite Valley that truly claimed him. In 1868, he walked across the San Joaquin Valley through waist-high wildflowers and into the high country for the first time. "Then it seemed to me the Sierra should be called not the Nevada, or Snowy Range, but the Range of Light...the most divinely beautiful of all the mountain chains I have ever seen."

By 1871 he had found living glaciers in the Sierra and conceived a then-controversial theory of the glacial origins of Yosemite Valley, later recognized as valid by Louis Agassiz who was the premier geologist of the day. He began to be known throughout the country. Famous men of the time - Joseph LeConte, Asa Gray and Ralph Waldo Emerson - made their way to the door of his pine cabin.
Beginning in 1874, a series of magazine articles by Muir entitled "Studies in the Sierra" launched his successful career as a writer. He left the mountains and lived for awhile in Oakland, California. From there he took many trips, including his first to Alaska in 1879, where he was the first Euro-American to explore Glacier Bay. In 1880, he married and afterward managed his father-in-law’s fruit ranch with great success. But ten years of active ranching did not quell Muir's wanderlust. His travels took him to Alaska many more times, also to Australia, South America, Africa, Europe, China, Japan, and of course, again and again to his beloved Sierra Nevada. It’s said that his wife, noting his restlessness, would occasionally “shoo” him off from the ranch and tell him to go to the mountains for the sake of his soul.
In later years he turned more seriously to writing, publishing a remarkable opus of 300 articles and 10 major books that recounted his travels, expounded his naturalist philosophy, and beckoned everyone to "Climb the mountains and get their good tidings." Muir's love of the high country gave his writings a truly spiritual quality. His readers, whether they were presidents, congressmen, or plain folks, were inspired and often moved to action by the enthusiasm of Muir's own unbounded love of nature. Muir felt a spiritual connection to nature. He believed that mankind is just one part of an interconnected natural world, not its master; and that God is revealed through nature.

Through a series of articles appearing in Century magazine, Muir drew attention to the devastation of mountain meadows and forests by sheep and cattle. With the help of Century's associate editor, Robert Underwood Johnson, Muir worked to remedy this destruction. In 1890, due in large part to the efforts of Muir and Johnson, an act of Congress created Yosemite National Park. Muir was also personally involved in the creation of Sequoia, Mount Rainier, Petrified Forest and Grand Canyon national parks. And his writings influenced the later establishment of several other national parks and monuments. Muir deservedly is often called the "Father of Our National Park System".
Johnson and others suggested to Muir that an association be formed to protect the newly created Yosemite National Park from the assaults of stockmen and others who would diminish its boundaries. In 1892, Muir and a number of his supporters founded the Sierra Club to, in Muir's words, "do something for wildness and make the mountains glad." Muir served as the Club's president until his death in 1914.

In 1901, Muir published Our National Parks, a book that brought him to the attention of President Theodore Roosevelt. In 1903, Roosevelt visited Muir in Yosemite. A three-night camping trip they made together could be considered the most significant camping trip in conservation history. There, together, beneath the trees, they laid the foundation of Roosevelt's innovative and notable conservation programs.
John Muir was perhaps this country's most famous and influential naturalist and conservationist. He taught the people of his time and ours the importance of experiencing and protecting our natural heritage. His words have heightened our perception of nature. His personal and determined involvement in the great conservation questions of the day was and remains an inspiration for environmental activists everywhere. Muir Woods National Monument, (see pic below) a grove of redwoods north of San Francisco, is named in his honor, as are the 211-mile John Muir Trail, Muir Beach, John Muir College, Mount Muir, Camp Muir, and Muir Glacier.

LINKS for information obtained (from articles at the following sites)
John Muir, life and biography
Muir and National Parks
John Muir in wickipedia
Researched and compiled by John I. Blair

Click on John I. Blair for bio and list of other works published by Pencil Stubs Online.Below: Scene in the Muir Woods National Monument 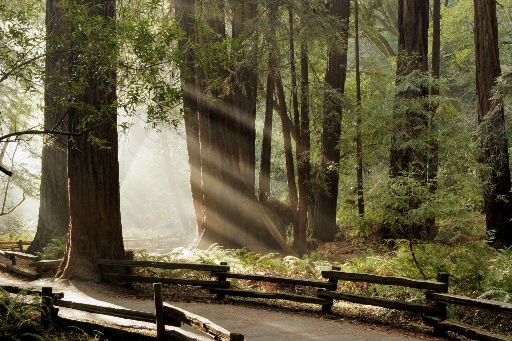