“Everybody needs beauty as well as bread, places to play in and pray in where nature may heal and cheer and give strength to the body and soul.” - John Muir.
Offering a renewing source of beauty is what we attempt with each issue of this little ezine. The columns, articles, stories, and poems are filled with lovely thoughts, which will be inspirational to many of our readers. Even when admonitions are voiced, the intent is to be uplifting. This month's compositions have been a joy for your editor to work with while preparing for publication. May each of you find something memorable to tuck within your heart.

"And All His Songs Were Sad" captured the attention and the column "Irish Eyes" by Mattie Lennon this month. Thomas F. Neill's column "Introspective" gives some insight into his teaching technique at the school in Suchow, China, as he tells his students about gratitude.

Dayvid Clarkson in his "Reflections of the Day," focuses on what Love isn't and is. Judith Kroll's column "On Trek" has memories of her late father and the joys they shared, including their way of looking at and reacting to challenges.

"Armchair Genealogy" by Melinda Cohenour, continues her research and compilation on Sidney Washington Creek with a fourth chapter. She feels one more chapter in September will wrap up his dramatic and historical tale. Rod Cohenour ("Cooking With Rod") calls up some of his helpmate's favorite recipes. He and wife Melinda often share the kitchen while preparing lucious meals. This month's highlights are their Original Southwestern Breakfast Dishes.

LC Van Savage of Maine, enjoyed her visit to Burnt Island so much that she fills her column ("Consider This") with all the info needed for others to visit there. She also has an article "Statues High Up" this month. The other article, reprinted from the author Bethany Whitaker's blog "Altogether Beautiful" shares her "First Year Lessons" while celebrating her anniversary in July. The single story is by your editor's late aunt Linnie Jane (Joslin) Burks, who with her husband (the late Dr. Edgar Burks) served as Nigerian Missionaries for 34 years through the Southern Baptist services. Her story "My Most Unforgettable Character" is about one of the people met during that time.

One of the poems, "New Home in Louisville, Kentucky" was written by Linnie Jane Burks also, and precedes the Nigerian service, as it falls in the time of her husband Edgar Burks being named as a minister in Kentucky. They both had just graduated from the Baylor Seminary in Texas with multiple degrees.

Your editor with Mother and two sisters spent the summer in 1945, at the Island featured in three of the following poems. The island mentioned was formed when the river split on its way to the Elk River near Pineville, Missouri. One branch was thus named Big Sugar Creek and the other Little Sugar Creek. Access to the island, with its home perched high above many huge boulders leading down to the rivers, was only by a Swinging Bridge, at the time the longest such bridge in use in the USA.

It was a fascinating summer and the pic below shows Mother (Lena May Joslin Carroll) with her brothers Jackie and Rex, her parents Artie and Carrie, and her sister Linnie Jane, close to that time. The poems "The Old Pike Road," "Beautiful Island," "Rain Drops and Rivers," and "Beautiful Island of Dreams" are by Carrie E. Joslin, Linnie Jane's mother and the maternal grandmother of your editor and Melinda Cohenour, author of "Armchair Genealogy."

Bud Lemire's poem is written as though his late brother were the author, expressing what Bud hopes his brother has found "In Spirit." Bruce Clifford's poems this month are "Hold on Tight" and "Don't Stand in The Rain." John I. Blair's half dozen are "Fine Leaves," "Fifty Years," "Waco Zoo July 2017," "A Time for Goodbyes," "Pain 2017" and "Old Moon." Judith Kroll penned the poignant "The Couple Who Stole The Night."

Mike Craner, without whom this ezine would have never made the web, deserves many bouquets for his expertise and patience. Thank you again, Mike.
See you in September !!! 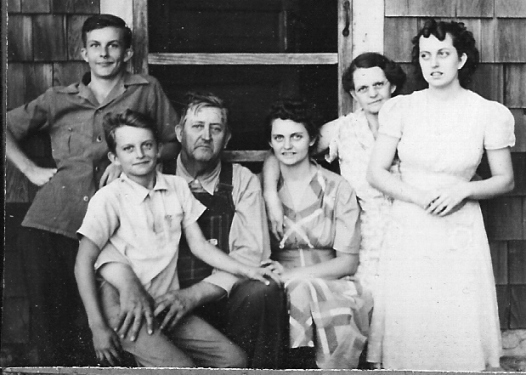