I've recently taken a break from my writing to start getting more inspiration in the little things. I don't know when I'll be back to regularly writing. Later this summer probably. But for now, here is a reflection on our first year of marriage!

One year. How have we already been married for one full year? Honestly, it's really hard to process because we have experienced so much in this first year of marriage. So much love. Struggle & hardship. But also, so much life. We moved to a new city and this new city has given us so much. We finally got to live in an apartment, just the two of us, and not with roommates. We experienced our first holiday's together and forming new traditions for this new family of just the two of us. There was a lot of laughing, but also quite a bit of crying (mostly by me.) We experienced the joys of finding new jobs and the struggles of losing a job. We've seen the worst of each other but also the very best. We've walked through some trenches already and I know there’s a lot more to come. But, I love being married. I would choose him again and again and again. He is my best friend—no one knows me like he does. He knows my heart better than anyone else—my fears, insecurities, worries, struggles, and my joys, passions, and dreams, and he loves me still. He fights for me, for us. He protects me, physically, emotionally, and spiritually. He loves me, despite my flaws and failures, because I am definitely NOT a perfect wife. He is humble and teachable and full of grace and he has taught me how to be those things.

I am a better person because I married Blake. He helps me to be patient, more loving, more positive, and more spontaneous. He is the epitome of authenticity in a person and he makes me want to be more like Jesus every day. Marriage changes you, but in a good way, and it also challenges you. You are constantly learning.

Here are some lessons we've learned and continue to learn:

1 year together, and every day I seem to love him more and more, and somehow I think we are only just scratching the surface of this love.

From hunting Pokémon to binge-watching 14 million shows, I cannot think of a better person to do this crazy thing with.We are so alike and so different, in all the right ways. He is the only person who wouldn’t make me feel weird for stuffing my face with 20 chicken nuggets and then five minutes later saying "I'm still hungry" just because I love chicken nuggets. He's the only person that I can stay up laughing with for an hour when we're supposed to be asleep because of the most off the wall joke. He's the only one who accepts my serious obsession with babies, coffee, pretty journals, and Harry Potter with only the occasional eye-roll and he is the only one who actually really enjoys and most of the time, laughs, at my insane weirdness. He is the only person who I feel completely comfortable around, even when I'm on the verge of a panic attack, and he is the only one who has ever been able to pull me out of a panic attack just by wrapping his arms around me.

One year later, married life has settled into the daily routine of work and play, but I don't take any of it for granted, or at least I try not to. Every now and then, in a moment of reflection, I'll smile as I remind myself that this person I first met at 17 years old, who is so funny, generous, handsome and warm is now my husband.

See, I didn’t realize this a year ago, but there are a lot of promises that aren’t explicitly stated in marriage vows, that would sound incredibly mundane and probably quite alarming at a wedding so you have to dive in and learn them over time. “For better or worse” sounds wonderful of course, but vague; one year later, I understand that that means “I’ll bring you medicine and water when you’re sick and make sure you aren't actually dying” and “I won’t act like a raging angry person when you, like a human being does, forget to do something,” and "We're going to get through this rough patch and come out stronger".

One year down and a lifetime to go. You are my favorite person in the history of people, and I truly can't imagine a life without you by my side. Our love story is certainly not perfect, and it may not be as epic as the love stories in the movies, but it's ours and I would never trade it for anything else. Wherever he is, that's home. Since I ended my vows with a Ted Mosby quote one year ago, I figured it would be appropriate to end my one-year reflections with another quote.

"Shouldn't we hold out for the person who doesn't just tolerate our little quirks but actually kinda likes them?" - Ted Mosby 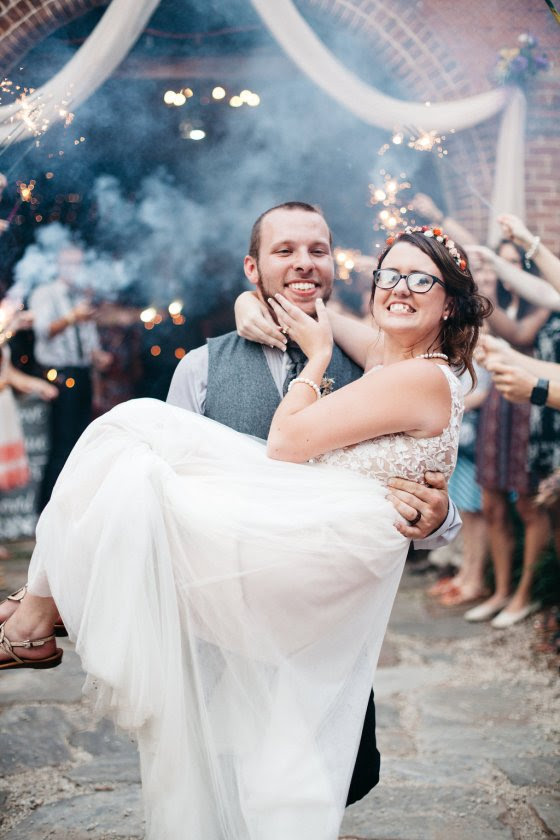