Hearse, Rehearse and Some Wonderful Reading


I was recently at a funeral in Kerry. The deceased was an elderly woman who hadn’t ever married. I can’t vouch for the veracity of the following but one of the mourners told me she requested no male pallbearers. In her handwritten instructions for her memorial service, she wrote, “They wouldn't take me out while I was alive, I don't want them to take me out when I'm dead.”

I don’t know if that is fact or fiction but . . .the undertaker did leave the keys in the ignition of the hearse outside the funeral parlour. A couple of “under-nines” were playing in the vicinity and when the coffin was placed in the hearse they keys were missing and could not be found. While we were waiting for a replacement to arrive from Tralee, a Kilgarvan man said to me “You could write a play about this.” I expressed a hope that he didn’t expect me to write a drama on the subject and he let me know that he meant that a play could be written about it.

Being in the heart of amateur drama country when plays were mentioned we were soon talking about rehearsals. “Speaking about rehearsals and hearses, “ says the Kilgarvan man, “ do you know where the word hearse and rehearse come from?” When I answered in the negative he went on, “It comes from Middle English: from Anglo-Norman French herce ‘harrow, frame’, from Latin hirpex ‘a kind of large rake’. The earliest record of the word in English in the sense that we know it meant the latticework canopy placed over the coffin (whilst in church) of a distinguished person, and it probably arose from the late Middle English sense ‘triangular frame (shaped like the ancient harrow) for carrying candles at certain services’. The word, originally spelled herse, comes from the Latin hirpicem, which was a large rake. Eventually hearse came to mean the structure constructed over or around a coffin, and its modern sense, of a vehicle used during a funeral procession, pops up in the mid 17th century. The word rehearse is distantly related to hearse, for rehearse etymologically means 're-harrow,' or, metaphorically, to 'go over again.' It was not until the late 16th century that the word came to refer to practicing a play, scene or part in private before a public appearance." The Kilgarvan man was just starting to describe a line from A Midsummer Night’s Dream when the replacement hearse arrived from Tralee.

And while I have you let me tell you about a wonderful book that I read over Christmas. Even in this age of texts, twitter and all mod con means of sending and receiving electronic epistles, Christmas sees pillar- boxes full to capacity and postal workers doing overtime. But how much do we know about the Irish Postal Service? I knew very little until I got a seasonal present of The Post Office in Ireland; An Illustrated History, by Stephen Ferguson, published by Irish Academic Press.

Between the covers of this hardback tome of almost 500 pages we are taken step by step of the postal service in Ireland over the past 300 years. In the preface the author writes, “ . . . a great deal of historical material has been lost in Ireland.” However it is not evident in any of the 448 pages that any “post office material” has been lost. We Irish are storytellers and consequently communicators. Ferguson points out that one of the earliest known Irish letters was written by none other than Saint Patrick. In the field of communication Irish people have certainly punched above their weight. Limerick man, William O Shaughnessy set up the Indian Telegraph system and Robert Hart of Lisburn formed the Imperial Chinese Post Office. And Napper Tandy and the French proclaimed Independence from a remote Post Office in Donegal. We learn that the creation of a postal network in Ireland dates from 1638 with a regular system of dispatching and staging posts but the nuclease of a postal service existed on this island, in the previous century. But the Irish Post Office was not set up as a distinct entity from the British until 1784. Stephen Ferguson states, “The relationship between Ireland and Britain is woven through the history of the Irish Post Office.”

Of course that doesn’t mean that the powers on the neighbouring trusted us. Oliver Cromwell’s Post Office act of 1657 stated that a single General Post Office was being established for the speedy conveying of letter but post in England, Scotland and Ireland and also, “ . . .to discover and prevent many dangerous and wicked designs, which have been, and are daily contrived against the Peace and welfare of the Commonwealth, the intelligence whereof cannot well be Communicated but by Letter of Escript.” Ferguson explains the important role played by the Post Office in government surveillance in more recent times. And actually names postmasters who, “Ensured that suspicious events and the correspondence of suspected people were kept under constant official notice.”

An Indecent Literature Enquiry noted that, contraceptives in postal packets from England would be returned with a “warning of prosecution.”

James Joyce’s Ulysses wasn’t ever banned if Ireland but . . . the fact that a copy of the masterpiece which was posted in Dublin, in 1923, six years before the Censorship of Publications Act, is still in the Royal Mail’s archive in London is a stark reminder of the power of postal censorship.

I likes these ha’p’ny postage cards,
And so, I prophesy, will most men;
The people’s pockets they regard,
And gives amusement to the postmen.
The envelopes , when people write,
Hides people’s secrets from their betters,
I take particular delight
In reading other people’s letters.

Due to Post Office regulations colour post cards were not seen in Ireland until 1894, although the Post Office had taken on parcel delivery in 1883. This ****hardback also includes hundreds of illustrations, images, photographs and line drawings and Punch cartoons, many of them unpublished previously. For instance there is a picture of a Fenian stamp believed to have been prepared in Boston in anticipation of a successful rebellion in Ireland in the 1860s. It bears the words, Republic of Ireland. When the GPO staff were evicted from the from the GPO at the beginning of the 1916 Rising a temporary telegraph room was set up in the drawing room of the Great Northern Railway’s premises in Amiens Street. Amid all the turmoil of war there was a photographer there to record the historic occasion. The excellent image is reproduced on page 245.

This is the first complete history of the Irish Post Office. I couldn’t do it justice in this short piece but please make purchasing it one of your New Year Resolutions. It is available in all good bookshops. Further information at www.iap.ie

And before you go . . . Chris O 'Donoghue, in Dublin, is setting up a worldwide Patrick Kavanagh Association. He is planning to have groups all over the globe . If you are interested in setting up a group he can be contacted at ; barnarusheen@gmail.com. 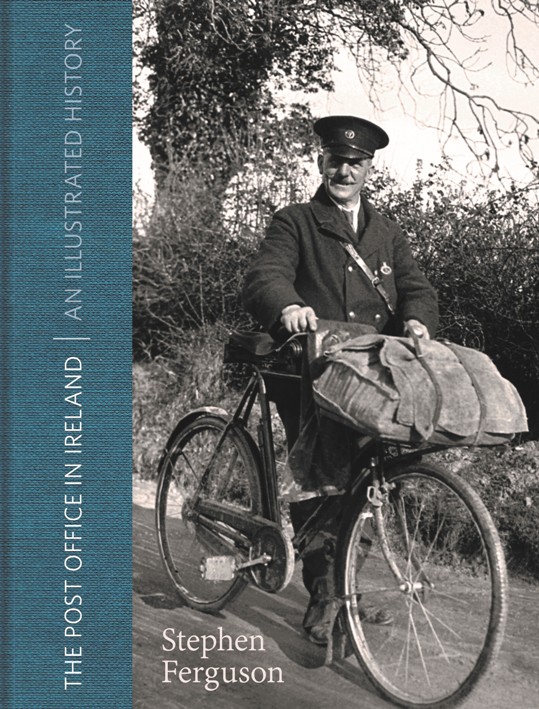