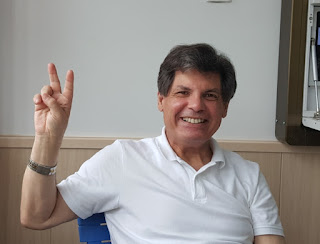 By Thomas F. O'Neill
I am now living at Lock Haven University in Pennsylvania and many of my friends are aware of my return to the United States from China. I will be attending the University of Lock Haven until June of this year. When I sat down to write this column, I was interrupted by a phone call from one of my friends who retired ten years ago in Hazleton, Pennsylvania. A decade ago he thought his retirement savings in the U. S. was a sure thing in terms of sustaining him through his twilight years. He is not that confident now and he is worrying about the decision he made to retire at the age of 72. The fear is he will outlive his retirement savings if he lives into his 90s. He will then be left with only his social security benefits. How will he handle the rising cost of inflation or the possibility of higher taxes down the road. Social Security is not his golden parachute toward a comfortable retirement after working for 38 years.

In the back of my mind I was fearful for him too I would hate to see him relying solely on social security in his 90s but that doesn’t have to be the case. I told him that many senior citizens continue to reinvest their savings in mutual funds well into their twilight years.

In 2005, I did investment planning for a living in Pennsylvania but unfortunately, I didn’t get rich doing it. I did however enjoy meeting and talking to the people I was helping. I helped quite a few people in the Pennsylvania coal region prepare for their retirement, but I was shocked at the level of poverty in Schuylkill County.

In my hometown of Shenandoah, in the heart of the Pennsylvania coal region many have hardly any savings. What shocked me the most was the number of people receiving welfare or a disability check. I wanted to help those people too but under State Law I couldn’t. I would have lost my state license if I invested some of their money into a mutual fund. Some of those people became angry and yelled that they’re being discriminated against. I always made the mistake of forgetting to ask what their source of income was before making my sales pitch. The economy is much stronger now than it was back then and 25% of your salary invested wisely over a 20-year period could yield a nice return.

Our path in life is paved by the choices we make and in China where I worked and lived for ten years the average Chinese person saves or invests 25% of their income. They prepare wisely for their retirement beginning from the day they start their first job. Their investments can go a long way especially now with China’s booming economy.

The state of the U.S. economy came up quite a bit in my Cultural Diversity classes in Suzhou, China. I told my students that the slow growth to a full recovery from the great recession of 2008 was hampered by various factors including the devaluation of the American dollar. In other words, the U. S. dollar was quite weak ten years ago but today it is much stronger.

Our National debt - over 14 trillion and counting is having an adverse effect on the strength of our U.S currency. Our American government is also printing more money to pay off loans it owes to foreign governments. The printing of that extra currency, and the fear that the U. S. may default on its loans is having a negative impact on the value of our U. S. dollar.

The dollar's value can also be measured by exchange rates, Treasury notes, and the amount of dollars held by foreign countries. These three measurements usually are in sync with each other. No matter how you measure it, though, the dollar has lost value over the long-term. Ten years ago foreign investors began diversifying their portfolios with more non-dollar denominated assets for fear of a very slow economic recovery in the U. S. You can easily measure the value of the U. S. dollar by its exchange rate by comparing its value to other currencies. The exchange rates allow you to determine how much of one currency you can exchange for another.

These rates change every day because currencies are traded on the foreign exchange market, known as ‘forex.’ A currency's ‘forex’ value depends on a lot of factors, including Central Bank interest rates, the country's debt levels, and the strength of its economy. Most countries allow their currencies to be determined by the ‘forex’ market this is known as a flexible exchange rate.

Ten years ago, the European ‘Euro,’ the British Pound, the Australian dollar, and the Canadian dollar were all stronger than our U. S. dollar. That was one way of measuring the United States economic strength or weakness on a global scale.

The value of the American dollar can also be measured by the demand for U. S. Treasury notes. The Treasury Department sells notes for a fixed interest rate and face value. Investors bid at a Treasury auction for more or less than the face value and can resell them on a secondary market. High demand means investors pay more than face value and accept a lower yield. Low demand means investors pay less than face value and receive a higher yield. That's why a high yield means low dollar demand - until the yield goes high enough to trigger renewed dollar demand.

The value of the dollar, whether measured by exchange rates or Treasury yields, is still undermined by the over $14 trillion U. S. debt. The U. S. government is releasing more and more treasury notes to offset its debt crises.

Foreign Currency Reserves of American dollars is also a way to measure the value of our U. S. currency. The U. S. dollar is held by foreign governments who have an excess of dollars. They hold our currency in foreign currency reserves when the value is high. The excess happens when countries, such as Japan and China, export more than they import.

If the dollar declines, the value of their reserves also declines. As a result, they are less willing to hold dollars in reserve. They diversify into other currencies, such as the euro or even the Chinese Yuan. This reduces demand for the dollar, putting further downward pressure on its value.

There was a record $3.28 trillion in foreign government reserves held in dollars in 2011. This represented 60% of total measurable reserves. In 2008, however, just prior to the great financial meltdown in the US, dollars comprised 67% of reserves and the percentage of dollars continued to slowly decline. That meant that foreign governments were slowly moving their currency reserves out of dollars. In fact, the value of euros held in reserves increased from $393 billion to $1.45 trillion during this same time period. Although it increased rapidly, it was still less than half the amount held in dollars.

The devaluing of the U. S. dollar did however have a positive affect with the U. S. economy in terms of exports. When the dollar declines, it makes U. S. produced goods cheaper and more competitive on the global market compared to foreign produced goods. This helped to increase U. S. exports, boosting economic growth.

First, the value of a barrel of oil has declined 20% to the Saudis. Second, the value of the riyal, which is fixed to the dollar, has also declined 20% against the euro. To purchase French pastries, the Saudis must now pay more than they did before the dollar declined. To avoid this, the Saudis raise the price of oil, which they do by threatening to limit supply. You notice this when you pay more for gas each week.

The growing U. S. debt weighs in the back of the minds of foreign investors. That's why they may continue to gradually move out of dollar denominated investments - slowly, so they don't diminish the value of their existing holdings. The best protection for an individual investor is a well-diversified portfolio that includes foreign mutual funds.

My investments over the past ten years have been made in China’s financial markets in Shanghai. There is a vast amount of wealth being generated in Shanghai, due to its booming economy. China will soon allow U.S. companies that do business with mainland China to advertise on the Shanghai stock exchange. The result will be higher profits for the U. S. companies and other foreign companies that do business with mainland China. China’s overall goal though is to make Shanghai the financial center of the world by 2020. Hopefully, I will be back to working and living in Suzhou, China with a little wiser and smarter investment.

My students over the past ten years seem so much smarter than I was at their age not only do they have a thirst for knowledge, but they understand the importance of its proper application not only to enhance their own lives but their Nation as a whole. I tell my students that today’s wise investments, whether they are monetary investments or investments in learning, those wise choices are mere prologues toward a brighter future.