Some time ago a Donegal man was admitted to Letterkenny hospital with injuries received when he was assaulted by a Fianna Fail canvasser. It prompted the news headline, “TAMMANY HALL/DONEGAL. COINCIDENCE?” You don’t often hear the Democratic Party Political Machine discussed in Tir Conaill.

But why would you? They have their own famous hall . . . in Leghowney. Where is Leghowney? According to a local publication it’s,

“ A Townland outside Donegal. Green hills and bumpy roads wind across it from Clogher to Aughlim and on up the 'Whinney Lane'; the streets have no names but every house is known - from Boyles' to Cassidy's, Hone's and a few other delightful neighbours. The craic fills the air in Leghowney's local, thriving community centre that brought the first National Sheep Racing event to Ireland ...”

(The townland is now firmly on the map but it's worth noting that when William Bulfin's " Rambles in Erin" was published in 1907 an irate reader in Leghowney wrote to the Editor of the Barnesmore Bugle complaining that, while Mr.Bulfin wrote in glowing terms about about Ballyshannon, Mountcharles and Frossas he, " . . . failed to give one mention to Leghowney .”)in 2008 (with a little help from a Monsieur Looson n'est-ce pas?). Let friends know that Leghowney should be kept a well-known secret - known to some and left unspoilt by others.

In 1932 the Leghowney Flute Band was formed and its Home at that time was a Barn belonging to Edward Travers in Finadoose. This premises was used for band practice meetings and to store the instruments. It was also the headquarters of the local Fianna Fail organisation.

Barns and schools were the only venues for the functions i.e. dances and concerts, which was the only entertainment at that time.

At the time house dances were also a very important part of the Local Community. In every house there was an instrument: a fiddle, an accordion, mouth organ or tin whistle. Wasn’t it immortalized by the poet?;

On the white wall flickered the spluttering lamp
And lit the shadowy kitchen,
The sanded floor,
The girls by the painted dresser.......
These on the settle, those on the table; the turf
Sent up faint smoke and faint in the chimney light
From the frost-fed stars trembled and died
....the girls wide-eyed
Their loose hair flying,
Danced to the shuttle of lilted music weaving
Into the measure the light and heavy foot.

The Free State government introduced the House Dance Act of 1935 which banned dances , dancers and musicians. You had to get a licence to hold a dance even in your own house. They came up with a moral argument against dancing and ….if you don’t mind . . a sanitary facilities argument. But as one commentator said, at the time, “the Government don’t care if you make your water down the chimney as long as they get their money.” BUT A breach of the law could result in a court appearance and penalty.

With a big population of young people around the area and most of them able to play music, they were able to entertain. It was talked about at these house parties that a Dance Hall should be build in the Leghowney area.

A final decision was taken at a meeting in Edward Travers Barn in January 1937, that a hall would be built and a committee was set up, a site acquired in Aughlim in Ned Gillespie’s field and for some unknown reason this site was not built on. The location was to be changed to a field belonging to Edward Murphy.

Building work started June of 1937 and the famous Leghowney Hall was opened on the 11th of November 1937. The proceeds on the night was 19 pounds 17 shillings and six pence. The site for the Hall cost 5 pounds and the structure of tin and timber cost 400 pounds, two melodians for 2 pounds and they are still dancing in Leghowney 75 years later and after a major refurbishment it will accommodate and entertain for another 75 years.

John Cassidy (local businessman and cousin of the well known author of the same name) says, “On the opening night music was supplied by local musicians and the big band was the Great Music of Paddy McCafferty's Band from Ballyboffey who entertained many a night until the mid 60s. Other great bands who played there in the 40s, 50s and early 60s were the Slieve Foy Leo and Baba Brennen, Steve McPelemy, Alex Glackin, The Haugheys (the lyrics donegal town), Willie Ponsonboy, The Keynotes and many more. Then we had the Skiffile Groups from Laghey and Donegal Town and of course we had our own local musicians Peter Travers, The McNamees, Hone Brothers Sean, Pat and Joe Kilpatrick”

In November 2012 Leghowney Hall will be 75 years old but the good people in this area of south Donegal won’t wait for eleven months to celebrate. Celebrations start on New Year’s Day. 2012,in Leghowney will see drama, singing and all aspects of the performing arts. There may not be a spluttering lamp or painted dresser but you can bet there will be;

Leghowney Drama Club is one of the oldest in the country. It was started, also, in 1937 and in the intervening years has earned for itself widespread distinction and prestige. The late Anew McMaster once said: "The preservation of the theatre has passed from the hands of the professional to the amateur." One need not look further than Leghowney to see how true this is. 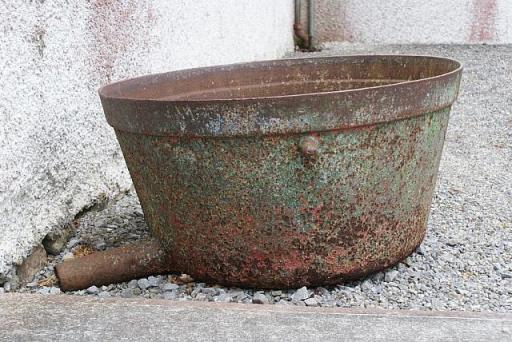 Also there has been a Famine-pot (a grim reminder of “black 47”) found in the area and it Will be unveiled in 2012. Details on; www.leghowney.com

And what about the sheep racing? Forget about the Kentucky Derby, the Grand National and the Cheltenham Gold Cup and concentrate on the Donegal Hardware Handicap. Every year since 2008 Leghowney has held a Sheep Racing Day. After the 2011 event a Barnasmore farmer told me a story about how a ram from Clogher was leading by several lengths in a Steeplechase until he made a “ewe-turn.”