I remember, I remember
The house where I was born.
The little window where the sun,
Came peeping in at morn.

I can’t identify with that sentiment of Thomas Hood.

The house that I was born and grew up in backed on to the “Lodge Lane.” My father, a master of over simplification and sometime wit, used to say that we lived “in the shelter of the road ditch.” Our house had no windows facing the road. My forebears didn’t pay any attention to Thomas Fuller’s assertion that, “Light, God’s eldest daughter is the principal beauty in a building.”

In Kerry such a dwelling would be described as Tig a’doicheall (the house of no welcome.) But the design of our house had nothing to do with inhospitality but with climatic foresight.

I don’t know if lack of adequate diurnal illumination from one side had any sort of serious detrimental effect on me psychologically but not being able to see the owner of a footfall could be somewhat frustrating for a small child, especially one with an enquiring and restless mind, although I could eventually identify those with a peculiar or unique step or other audible characteristic. One neighbour had a distinctive throat clearing exercise followed by an audible discharge of the result on to the road. Another hummed a particular tune. (I presume it was a tune it was a consistent “rowdedly dowdedly dom.”)

In the days when the horse and cart dominated, my ancestors could tell who the owner was from “the clout of his axle” but I found it more difficult to identify vehicular traffic. A Thames van sounded different to a Ferguson tractor but that was about it.

Whenever I am awoken from my slumber by the sound of an engine, be it in Ballybunion or Belgrade, Lifford or Lisbon, I am no longer an OAP with free travel. For the first few of my awaking moments it is no longer the twenty-first century. It is once again the early fifties. And my auricular faculty is receiving the sound of an engine labouring up the Lodge Lane .

However there is now a new phenomenon in vehicular traffic that will puzzle even the most sensitive auricular sense. ESB launched The Great Electric Drive for the second year running in February 2014. This included an invitation to members of the public and business organisations to join a new team of Ecar ambassadors to trial an electric vehicle.

There were 20,000 applications and 32 ambassadors were selected. Each will trial an Ecar for a period of four months. I interviewed one of those Stephen O Brien, from Celbridge, County Kildare. Stephen took me as a passenger in the electric Nissan Leaf.. I would, however, be concerned about one safety factor. When travelling at under 30KPH it emits a barely high frequency whine which is only discernible in the absence of all other surrounding sounds. I have contacted several main dealers about this feature but got a very poor response; but Colm Mooney from Linders Renault in Chapelizod, told me that as far as ‘Approaching Vehicle Audible Systems’ (AVAS) are concerned the most audible is the new Renault Zoe.

Questions about the issue which I sent to the relevant people in ESB drew a blank. The Nissan Ireland Team replied with the following,


“This sound (not a whine, more a woosh) has been designed to be distinguishable in the hearing threshold of children and anyone with hearing devices. It's above the frequency threshold of sounds produced by Diesel engines. Inside the car the noise is projected ahead of the car so the driver is not distracted.
Noise in a vehicle does not necessarily stop accidents. We unfortunately have bus, motorcycle, car accidents with pedestrians everyday. An S Class Mercedes turns over at an almost inaudible level- this is not cited as a safety risk. Pedestrians have a responsibility of safe road use.”


Stephen put up over 1000 km in the first week and he says that the best road for chargers seems to be the M1, with quick charge points at Lusk, Castlebellingham. “The car itself is quick to move off and has enough in the tank to do the average daily commute” according to Stephen. He shares my concern about the lack of sound describing it as “deafeningly quiet.” He spoke of one incident in particular, “As I was on my way home yesterday I was heading into my estate and a young schoolchild on a bike cycled into the path of my car. It was only when I hit the horn that he swerved back into his lane with a face of fright on him.”

Would Stephen buy an electric car? “I have to say as a second car it would be perfect. At the moment, all on street chargers are free to use and the cost for home charging is under €12 for approximately 900kms. There is no engine and no oil. A service is required every 30,000 km. At first the thought of "going dry" is a real fear, but once some quick planning is done as you would plan for a long trip with a map, the anxiety goes. The bible is the ESB ecar connect app on the phone which displays all current operating chargers in the country, it calculates where you are and how close you are to the closest charger.”

When Alfred de Vigney wrote, “Seul le silence est grand” (Only silence is great) he couldn’t have foreseen the invention of the Ecar. The Pedestrian Safety Enhancement Act of 2010, proposed by NHTSA, required the U.S. Transportation Department to write a rule addressing this issue by Jan. 4, 2014. Automakers would individually decide what the car sounds like when going less than 18 mph while meeting certain minimum requirements. According to a 2011 U.S. National Highway Traffic Safety Administration (NHTSA) study, electric vehicles are twice as likely to cause accidents while backing up, slowing or stopping, starting in traffic, or entering or leaving a parking space or driveway. The agency said a so-called “quiet car rule” could potentially save 35 lives and prevent 2,800 injuries each year, approximately costing an additional $35 per car.

And in European Parliament MEPs voted to introduce mandatory ‘acoustic vehicle alerting systems’ (AVAS) – sounding like a conventional engine - to all new electric and hybrid cars to protect vulnerable road users. Electric cars and plug-in hybrid cars such as the all-electric BMWi3 or the Toyota Prius currently emit very little sound when running on electric power only. Earlier proposals from the European Commission called for the installation of an artificial sound system to be done on a voluntary basis only but Liberal Democrat MEPs successfully introduced an amendment making this a mandatory requirement for all electric and hybrid vehicles. Following the vote manufacturers in the EU will have five years to comply with the new rules.

“During Ireland’s term as Presidency of the European Council in the first half of 2013, the Road Safety Authority chaired the Working Group meetings at which this proposal was progressed. Early in the discussions, Ireland made a submission that hybrid and electric vehicles would require the mandatory fitment of AVAS (it had been optional on behalf of manufacturers in the original proposal). Other Member States became supportive of these proposals and by the end of the Irish Presidency, a consensus was achieved requiring manufacturers to install AVAS in all new vehicles. The EU proposal for a regulation on vehicle noise was formally adopted as a regulation on 16 April 2014 (Regulation (EU) No 540/2014). There was some concern that this might not be done during the term of the outgoing European Parliament but thankfully there was a positive vote in Strasburg in probably one of their last sittings. The regulation takes effect from 1 July 2016 and includes provisions with regard to the mandatory fitment of Acoustic Vehicle Alerting Systems (AVAS). It is optional for manufacturers to fit AVAS prior to the dates specified in Article 8 of the regulation, but where fitted it must comply with the harmonised requirements prescribed. Ireland has currently no plans to introduce the mandatory fitment of AVAS (or similar such devices) at dates earlier than those set out in the EU legislation.”


The following information was given to me by Philippe JEAN, Head of Unit European Commission, DG Enterprise and Industry Sustainable Mobility and Automotive Industry.

“ Research shows a higher risk of crash between vulnerable road users (bicycles, pedestrians) and hybrid electric vehicles than with vehicles with internal combustion. All pedestrians are at risk but blind and partially sighted people are in those groups most at risk of experiencing collisions with quiet vehicles because they cannot see and hear the vehicles coming. . . All electric and hybrid vehicles will have to be fitted with an Acoustic Vehicle Alerting Systems (AVAS) to compensate for the lack of audible signal in hybrid electric and pure electric vehicles and alert vulnerable road users that such a vehicle is coming in their direction. . . . the requirements on AVAS are based on an international work carried out under the auspices of the United Nations which set up a special working group to work on this issue. The group is currently discussing more precise requirements on AVAS (2nd phase).


So, it appears that we may have adequate audio warning systems in the future but what will happen in the meantime?

Pic Below: Stephen O'Brien in his trial ECAR 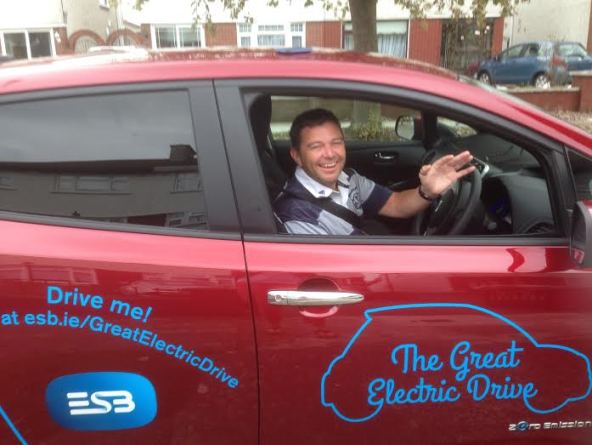