Always Looking – People Who Made A Difference IXX


William Batchelder Greene (1819-1878) was a prominent figure among the Massachusetts idealists during the middle of the nineteenth century. He was the son of the Democratic journalist and Boston postmaster Nathaniel Greene. Educated at the U.S. Military Academy, Class of 1839, Greene did not graduate due to ill health. Despite not graduating, he was commissioned in July, 1839, as Second Lieutenant, Seventh U.S. Infantry. After serving in the second Seminole War, he resigned in November 1841.

Subsequently, Greene was connected with the Brook Farm movement, after which he studied theology at Harvard Divinity School, graduating in 1845. He served as pastor at a Unitarian church in Brookfield, Massachusetts, and was a member of the Massachusetts Constitutional Convention of 1853. Later he left the ministry and went to Paris until the Civil War began. He immediately returned to Massachusetts because, although a Democrat, he was a strong abolitionist. He was commissioned and mustered as Colonel of the Fourteenth Regiment Massachusetts Volunteer Infantry on July 5, 1861. This regiment was ordered to the defenses around Washington. In January 2, 1862, the regiment was changed to heavy artillery. Greene resigned his commission in October, 1862, to continue his travels and writings.

Greene is best known for the works Mutual Banking, which proposed an interest-free banking system, and Transcendentalism, a critique of the New England philosophical school. In 1850 and 1851, he had organized citizens of Brookfield, Warren, and Ware, Massachusetts to petition the state's General Court for a charter to establish a mutual bank, which was denied. Similar attempts by the New England Labor Reform League in the 1870s met with similar results. Greene's mutualist banking ideas resembled those of Pierre-Joseph Proudhon as well as the "land banks" of the colonial period.

Greene had an important influence on Benjamin Tucker, the editor of the anarchist journal Liberty. According to James J. Martin, in Men Against the State, Greene did not become a "full-fledged anarchist" until the last decade of his life, but his writings show that he had as early as 1850 articulated a Christian mutualism, drawing heavily on the writings of Proudhon's sometimes-antagonist Pierre Leroux.


“The existing organization of credit is the daughter of hard money, begotten upon it incestuously by that insufficiency of circulating medium which results from laws making specie the sole legal tender. The immediate consequences of confused credit are want of confidence, loss of time, commercial frauds, fruitless and repeated applications for payment, complicated with irregular and ruinous expanses. The ultimate consequences are compositions, bad debts, expensive accommodation-loans, lawsuits, insolvency, bankruptcy, separation of classes, hostility, hunger, extravagance, distress, riots, civil war, and, finally, revolution. The natural consequences of mutual banking are, first of all, the creation of order, and the definitive establishment of due organization in the social body, and, ultimately, the cure of all the evils. which flow from the present incoherence and disruption in the relations of production and commerce.” (The Radical Deficiency of the Existing Circulating Medium 1857).


Greene was also a fine mathematician, and was versed in Hebrew literature and in Hebrew and Egyptian antiquities. Around the end of 1876 he went to England and was still there when he died a year and a half later. His remains were transported to Boston, to be buried at Forest Hills, Roxbury (Jamaica Plain).


Compiled and Adapted by John I. Blair from several sources including:

Blair adds this personal note: Greene is connected with a “bad” word – anarchism – but his basic ideas were directed at what he hoped would be doing good for common people; and he never advocated the violence that became associated with later anarchists like Kropotkin and Bakunin. I think he was appalled by it.

Click on author's byline for bio and list of other works published by Pencil Stubs Online.
Below:William Batchelder Greene,
pic by e3b0071d186c44b530cf78bce1eabe2d-pearlsquare-1 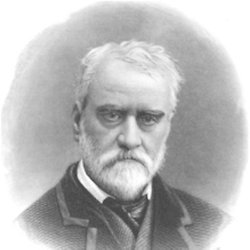