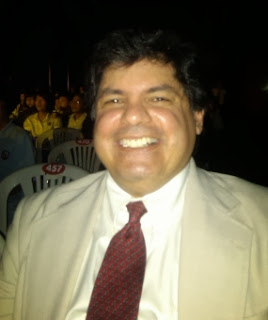 Many foreigners like me living in Suzhou, China, enjoy the experience of going to Shiquan Street. It is due to the many western bars and restaurants there. Two years ago I spent a portion of the Chinese New Year at an extremely popular place on that street called Jane's Pub Bar.

I wasn't aware at the time, though, that a huge firework display was going to be set off in front of Jane's Pub Bar to usher in the Chinese New Year. I got more enjoyment, though, from watching how excited the locals got when setting those fireworks off. I quickly pulled out my BlackBerry phone to capture part of the moment on film.

In America we rely heavily on public safety so it was quite amusing seeing the fireworks going off while the street was still open for traffic. No one seemed to mind, though, and we really enjoyed watching the night sky light up with booming bursts of exploding energy.

When the show ended and the smoke cleared a very attractive Chinese woman ran up and gave me a big kiss and yelled "Happy new year, Tom." That was quite exhilarating, too, and since that moment I've become a huge fan of the Chinese New Year.

I would have to say that the biggest holiday in China is the Chinese New year. The date varies though but it always falls between January 21 and February 20, determined by the Chinese lunar calendar.

Every Chinese New Year starts a new animal's zodiac year in China. This year 2016 is the year of the monkey. The animal zodiac is a very old custom in China. They name the years by one of 12 animals in their zodiac cycle. Many Chinese still believe in astrology and other New Year superstitions.

The Chinese New year is a time for making amends, reconciling with people, avoiding offence, and re-establishing old ties. They buy and wear new clothes, give gifts, and clean house.

The spring festival in China is a time where people travel to be with family and friends. It's China's winter vacation week, like between Christmas and New Year's Day in other countries. Schools in China get about a month off, and universities even more. China, Hong Kong and Macau, and nine other Asian countries have public holidays as well.

4% of the world's population is now on the move. Train stations in China are extremely crowded with commuters. 200 million Mainland Chinese travel long distances for the spring festival, and it is estimated that there are 3.5 billion people journeying in China at this time. For comparison, less than 100 million people travel more than 50 miles during the Christmas holidays in the US according to the American Automobile Association.

Billions of red envelopes are also exchanged at this time of year. Red envelopes with cash inside are given out from the older generation to the younger, from bosses to employees, and from leaders to underlings. It’s a special New Year's bonus.

China has the largest firework displays during the Chinese New year than in any other country. No single hour in any other country sees as many tons of fireworks lighted as in China. The firework displays begin around midnight at the beginning of the Chinese New Year. China produces about 90% of the world's fireworks! Many in mainland China believe that the flash and bang of firecrackers and fireworks scare away demons and evil ghosts.

The Chinese celebrate ‘the Lantern Festival’ it ends 16 days of festivities. Traditionally, the 16 days from New Year's Eve until the Lantern Festival - each of these 16 days has a special celebration activity. In the evening of the 15th day of the first lunar month, on the night of the full moon, families gather for dinner and go out and see fireworks and light lanterns. Lanterns are put up for decoration, let loose to fly, and floated in rivers. Ice lanterns shine in Harbin City China and High-tech giant ones glow with beautiful colors. Thousands of traditional smaller ones are lit also.

This year will mark my 7th Chinese New Year celebration here in Suzhou, China and I am looking forward to the majestic bursts of glowing energy light up the Suzhou sky.

It is a wonderful feeling to witness this time of year, especially, with close friends. So I would like to wish all of you a happy Chinese New Year and many more to come …….