BARNEY: When is the baby due?
PREGNANT WOMAN: December.
BARNEY: This December?

“Formalism, by being an 'ism,' kills form by hugging it to death", so said Peter Viereck but there are “isms” worth saving. Formalism is defined as, ”the practice or the doctrine of strict adherence to prescribed or external forms.”

Barney McKenna couldn’t be accused of such adherence.

Barney was one of the founder members of The Dubliners, arguably the most popular ballad group in the world. The group, which entertained audiences all over the world, stood the test of time for half a century. They will be remembered for generations to come as will Barney’s “spakes” known as “Barneyisms.” One member of the group described Barney as “living in a parallel universe.” He had a habit of saying things arse-ways and even those closest to him were unable to fathom if the barneyisms were deliberate or accidental. Perhaps a little of both. Another friend referred to his, “surreal use of the English language.” In the world of “isms” Donnycarney’s most famous son could hold his own with Reverend William Archibold Spooner or Richard Brinsley Sheridan’s Mrs Malaprop. Over the years I have heard many “Barneyisms” from the eternally young John Sheahan and in his poem Banjo Barney, John sums up every appearance that Barney made with the line, “ Barneyisms embellish the craic.”


Thanks to former “Dubliner”, Jim McCann the “Barneyisms “ are now between the covers of An Obstacle Confusion, published by Liberties Press. (The title comes from a Barneyism so bizarre that if I shared it with you you’d accuse me of making it up.) Jim McCann didn’t live to see the publication of his work. After a long battle with cancer he died on 05th March 2015 but thank God he didn’t take this marvellous collection of barneyisms to the grave with him.

Once on a concert tour in Germany his fellow artists were waxing lyrical about the panoramic view of the vine-covered hills and valleys. Barney’s contribution to the conversation? “Jaysus, there’s a fair few hangovers growin’ up there.”

One summer when the Dubliners were at the height of their fame Barney said, “I don’t care what’s in the diary, I want two months off in August to go fishing. “ And what other boat-owner would ask directions with, “When you come out of Howth harbour, do you turn left or right for France?”


Did you know that Barney was a vegetarian? I didn’t and neither did classical guitarist, Michael Howard. That is until the banjo- player explained to him “I only eat animals that don’t eat meat.”

One day, in a recording studio, Barney gazed at the dials and lights flashing rhythmically in time to the music being played back through the speakers. Suddenly the sound engineer was startled by a shout, “Which one of those is the rev-counter for the banjo.” All this from a man who was so considerate that, when locked out of his hotel room, removed his shoes so that he could,” . . .kick the door in quietly.”


The easy going Barney could, at times, be assertive. Like the time, on a plane, that Danny Doyle suggested, subtly, to him that he should change his T-shirt because there was stale vomit on the one he was wearing. Barney addressed him as “Mister Doyle” and stiffly pointed out, “ . . .for your information this is not my puke.”

The author doesn’t neglect to acquaint the reader with Barney the Philosopher. By way of illustration he tells the story of Barney’s concern when he ascertained that there were a billion people in China. “ Can you imagine the traffic jam around Stephen’s Green if they all wanted to get into O’Donoghue’s for a pint at the same time.”


One morning on tour he told John Sheahan at breakfast “I didn’t go to bed until about three this morning.” The ever patient John pointed out, “It was nearly six o‘clock ! You passed my room and woke me up.” Barney’s reply? “You shouldn’t have told me that. Now I’ll be knackered all day.”

In the foreword Jim McCann says, “On one occasion when I was regaling friends with some of the stories, Barney (who was laughing as hard as anyone) said the me: “’Tell them about the time I said that thing in Australia’ “. “That thing” referred to an Australian tour in 1968. Barney, on noticing the difference in temperature between Donnycarney and Melbourne commented , “Jaysus, it’s very hot over here.” When his friend pointed that it was only early morning and that by midday it would be a hundred degrees in the shade Barney had a plan. “In that case I’m staying out of the shade.”

The book is illustrated by Wendy Shea, a long-time friend of Barney. Wendy has illustrated for The Sunday Independent, Irish Independent, Irish Press, Sunday Tribune , The Irish Times any many more prestigious publications. And Sean O Keefe of Liberties Press told me, "We're delighted to have published An Obstacle Confusion, and are thrilled with the reception the book is getting. It's a fitting tribute to Barney McKenna, and a wonderful celebration of The Dubliners overall. Wendy Shea's illustrations really bring the stories to life."
The older I get the more I quote one particular Barneyism, “My future is behind me.” I haven’t space to tell you much more but as the man himself might say, “If you haven’t heard this one before this will be your first time to hear it”; when Barney was complimented on his storytelling prowess by a fan who told him, “Barney, they’re great stories. You should write them down.” “It’s Ok” says Barney, “I don’t need to write them down. I’ve got them all in my head.”


AN OBSTACLE CONFUSION is available from; www.libertiespress.com 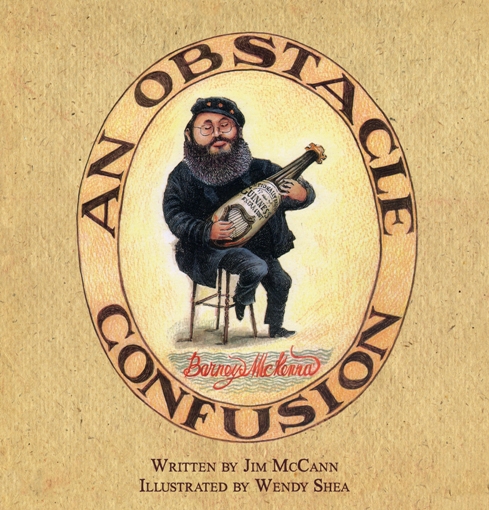