Honestly, I had never heard of that but I have now and it’s an absolutely great idea. I’ll react on all first Tuesdays after Thanksgiving Days from now on. Today is Friday but Giving Tuesday made me think of many things, and one of them is a man named Brad Terry. He gives all the time, on Tuesdays and every other day. If you live in this area and have attended any functions that are enhanced by background music, then it’s quite likely you’ve heard Brad Terry playing his magical Clarinet.

It’s tempting to call him “Young Man with a Horn” from the famous 1950 film although I’m not entirely sure a clarinet is called a horn. No, it’s a woodwind played with a reed. Is that a horn? No matter. And Brad Terry isn’t exactly “young” in the true sense of the word and yet his conversation, the sparkle in his eyes, his remarkable smile, his extraordinary handsomeness, kindness, and gift of listening and caring all blend to make him appear far younger than he actually is, and rumor has it he hovers around 80. Personally, I think he’s fibbing.

I so wish I had a great gift of description because I’d try to explain about the sounds coming from Brad Terry’s horn or woodwind or whatever. It is raspy and growly, sexy, throaty and oh, so musical. Transporting. He doesn’t poke the instrument into the air as Benny Goodman and others did while they played. Brad actually met Mr. Goodman and took three lessons from him when he was a young boy. (I am advised that pointing one’s instrument into the air while playing looks great in the old movies but doesn’t change the sound a bit.)

Brad Terry is a self-taught clarinetist although it is very hard to believe that a man who can make his instrument sing like that could possibly have taught himself, but he has. And his generosity with his music is astonishing. I have heard him playing background music at many functions, and I know he either did it for nothing or for very little recompense.

For example, Brad Terry frequently plays background music for local performances and because of him, the performances become even more alive and colorful. He selects music from his huge repertoire—I mean the one in his head---and matches it to the performances, often selecting the great old songs composed by the Gershwins, Cole Porter, Irving Berlin, Hoagy Carmichael—well, you know who I mean. The really good music.

Brad has led a most interesting life and I’d like to tell you about it here but there’s so much and his life is so varied and interesting that it would be better if you read it for yourself. Claiming he’s not a good writer, he disproves that with a wonderful, big book he’s written about his life, and it’s called “I FeeL More Like I do Now Than I Did Yesterday.” If you read this book you’ll maybe be able to figure out the meaning of those words. Brad has met and even played with our country’s great music makers and it’s not that he’s a musical name dropper---he just likes to talk about the music he made with those people and you will love reading about those fascinating experiences.

Brad Terry’s life has not been totally involved with music but luckily for us, most of it has. Music is the glue that holds Terry together with the many hats he’s worn; survivor, multiple school attendances, camp director, Army, 9 year old latch key kid in London, 20 trips to Poland since 1991 to play with the young and talented Polish musicians there. You can read about him on Google, Yahoo, UTube, Spotify and Wikipedia. He’s everywhere.

Brad Terry’s remarkable autobiography can be had by contacting him at bradskiterr@yahoo.com. But you should know when you begin reading that although not planned that way, what’s really great about this book is that you can flip it open to any chapter and read about this man’s remarkable life from any point, but it goes well in any direction. You will enjoy it immensely, I promise! This clarinet genius gives of himself in a myriad of ways, on Tuesdays and every other day of every year. This guy’s a trip!

(Pic below is more recent one of Brad Terry.) 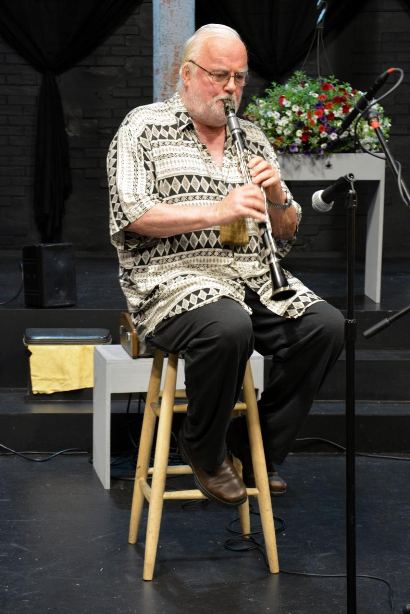