The Monahans-Wickett-Pyote Independent School District established a Hall of Honor to recognize and honor alumni, educators and community leaders who, through achievements, endeavors, leadership and character, have demonstrated excellence in their field and/or commitment of service to the school district; and therefore, are positive role models for the students of the Monahans-Wickett-Pyote ISD.

On May 27, 2017, AG Adair along with three other individuals was inducted into the MWP ISD Hall of Honor. Adair was nominated by Armando Flores, who stated he had known him his whole life and added, "Mr. Adair, in my eyes, will forever be known as "The Scribe for the Monahans Loboes." Those of us who have followed only have attempted to fill the void he left in writing about his community. Those are shoes no one will ever fill."

Flores prepared the remarks made by Mrs. Clara Edwards, who received the same category honor - MWP-ISD Supportive Community Member - in 2016. She presented the plaque to Dottie (Adair) Olgin during the Ceremony for the 2017 Hall of Honor inductees.


Mr. Adair became News Editor for the Monahans News in 1962. During that time until his death in October 1996, he wrote news articles and covered school related stories in academics, school board, school activities. But I remember him most for his coverage of Monahans Loboes/Loboettes (Lady Loboes.) His articles were factual and positive for the young athletes which is something that carries on today.
Mr. Adair was a charter member of the Monahans Optimist Club, a member of Monahans Masonic Lodge 952, where he was the first to receive The Golden Trowel Award for 50 years of Service. Additionally, he was a member of the Scottish Rite, York Rite Knights Templar, Patron of the Order of the Eastern Star, a charter member of the Ward County Council for Handicapped Children.

He became Sports Editor for The Monahans News in 1986, and served in that capacity until his death, contributing to the documented history of our beloved sports teams. He was a life member of the VFW and Adjutant of the American Legion. He was known for speaking to adults, youth organizations about his dedication to his country and the proper display of our nation's Flag. He got his start in the newspaper business upon his release from active Military Service in 1945 until 1996.

Along with the above noted information, Mr. Adair was a Christian who dedicated himself and his life to serving his country and his fellow man through his involvement in various organization in civic practice. The Monahans News office along with the Ward County Archives holds timeless examples of literature he wrote concerning Monahans High School that have become a part of history.

Three other inductees were honored in the Ceremony: Mr. Alfredo Franco with the MWPISD Alumni Award; Mr. Howard Powers (with 61 years teaching) with the MWPISD Employee Award; and (also posthumously) Mr. Perry Coursey with the MWPISD Extra-Curricular Award presented to his widow. 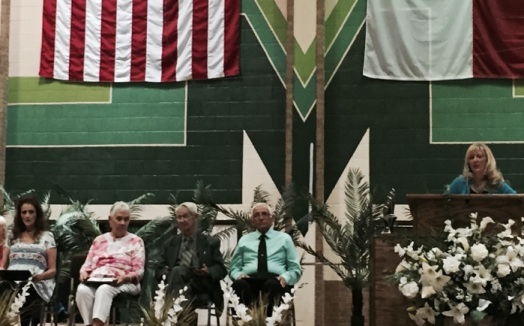 A lovely Reception followed the Ceremony of Induction where the Hall of Honor is, in the foyer of the Jerry Larned Complex. Faculty and MWPISD board members served refreshments. 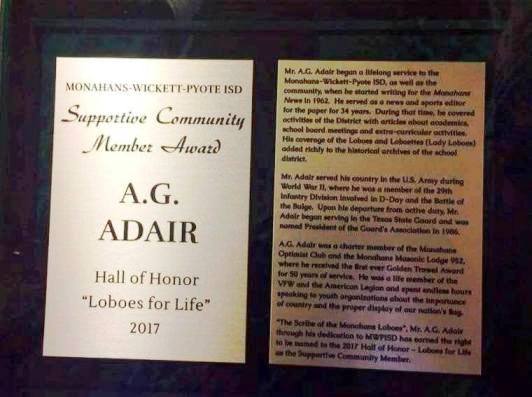 This next pic shows AG Adair in the early '90's, running the Goss Press that he and one Goss representative assembled in less than 24 hrs, then ran the first four color issue ever printed by the Monahans News. AG and one of his classmates established, and published a weekly commercial newspaper, beginning in their Junior year in Camp Wood, Texas, for which they received recognition from the Associated Press as being the youngest owner/publishers of a commercial newspaper in Texas. He also lettered in four sports and was Salutatorian when he graduated. After the war, an adult when he went to work at the Uvalde News, he began at the linotype machine, a skill that came in handy in Monahans when they were still doing "hot type" and their linotypist was delayed in an emergency. The entire paper had to be "set" that way, except rubber mats that served as the photo bases, black and white only. He always said his blood was at least half ink.