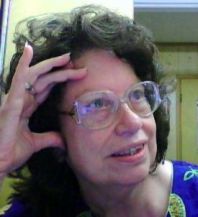 
" Anything worth having is worth working for, and is of lasting value. . . Unless you do not particularly want your dreams to come true, you can't afford to know the meaning of apathy. You must continually be on the scene with the muscles of your mind toned. "   --'Cherokee Feast of Days' February 20, Joyce Sequichie Hifler.


This is the month for St Patrick's Day which many observe in the USA with joy and celebration of their Irish heritage, no matter how lean that part might actually be of the blood running through their multi-nation veins. Your editor boasts of a quarter Irish compared to as small a percentage as Seminole which weighs in at 1/16th. Along with English, German, French, and Cherokee, the Irish doesn't leave an identifiable appearance, but it is right there in her heart. The cooking Editor Helmer, on the other hand is possibly half Irish and is as mischievous as a leprechaun. Perhaps that accounts for some of his inventive, ingenious recipes, and his personal take on some classics.

No telling which heritage or environment nuance instills the love of Nature which is most often expressed in the appreciation of wild flowers. This is indeed the season to start finding them as even the deserts bloom when there has been enough moisture. As this is written, five inches of snow lies upon a wide area of this part of the desert, the second snow this year, and a goodly amount of rain has also occurred. Of course, in this area precipitation is measured by hundredths of an inch, which totally freaked out the native St.Louisian who abides here, since he was used to our annual rainfall (9 to 11 inches) falling within 24 hours in Missouri. We are already ahead on that statistic for this time of the year in the weatherman's estimations. So the wildflowers should be outstanding this Spring.

When you do spot wildflowers you may want to use this link to help identify them:
Wildflower Field Guide This guide focuses on desert plants but there are many others to be found via the internet. The Chilopsis linearis, or Desert Willow is one of the flowering trees it mentions. The Desert Willow which has been growing in our yard since 1965, is shown in full bloom (and also one view in late August 2008 before the windstorm which took out some of the limbs) at the bottom of this column. Receiving more water and being protected from nearby trees, this tree has grown far more than those you will see alongside the roads and interstates, and the colors of the small orchid like flowers are much more vivid. The first blooms usually appear locally the first week of May, but always has at least one flower by the eighth of May. It was used as the logo of the original AMEA Publication, "Hobbies, Etc."

Peg Jones, in her column "Angel Whispers" salutes Spring from her Boston perspective. One can have beauty around them with a bit of effort and the blessing of the angels.

Leo C. Helmer goes even more Irish this month with "Cookin' With Leo," and Thomas F. O'Neill ("Introspective") discusses same sex marriages. Mattie Lennon shares a new release with us in his column "Irish Eyes" then announces a personal credit concerning one of his plays. John I. Blair in "Always Looking" offers some research data on chasing down family names, beginning with an unusual one. Great work, John. Eric Shackle continues the Dog wars in "Eric Shackle's Column," Gerard Meister tells "The Trouble with Men" in his column "Thinking Out Loud."

LC Van Savage discusses Opera like you've never heard it done before in "Consider This" then adds an editorial type column we show as an article, "A Tiger And His Stripes." Leo C. Helmer researched the subject of Lent, and presents a thorough discussion in his article, "All About Lent."

We are pleased to show a Story this issue from our own locale. In fact, it is somewhat of a 'legend' that conversation always gets around to at reunions. This "Tall Texas Tale That Is True" comes from the sister of one of the participants, Lily Jo (Walters) Abston who answered my request to use it with, "Thanks! This is exciting for me." Then she added, "Interesting thing happened yesterday ... the grandson attending Texas for grad work was on a bus on his way to class when the plane flew into the building. Grant immediately took photo with phone, put on Twitter and then CNN, AP, and Yahoo got in touch with him asking if they could use photo and give him credit ... Of course, he said yes so his name was all over the Internet! He is married to Colt McCoy's first cousin ... if you are a football fan, you'll know who this is!" For those who aren't as familiar with Texas football, here is a link for Colt McCoy at NFL combine. This is one of about 854,000 links for Colt McCoy that came up when we googled his name.

Mike Craner, webmaster, has been hard at work and we are now carrying the ezine in a new 'blog' format at http://www.pencilstubs.net which many readers prefer. However we shall maintain the ezine here at http://www.pencilstubs.com as the main vehicle for our publications.  Pencil Stubs Online is also on FaceBook and you can become a fan by going to this url PSO on Facebook or click on it from the sidebar if you are at the blog version.

Bruce Clifford is making good use of our new Blog format and has posted some of his poetry for the March issue there already. You'll find these poems for March, "The Right Thing" and "I Don't Mind," and Clifford's also showing his youtube song, "Watch Me." "Thirty Years Gone," has a nice ending and "In My Dreams," sounds like it goes with my opening quote. "The Limit" is a poem of someplace many of us have reached. "Leprechaun Lament" in honor of March 17, and "Time to Vote" thinking of the March 2d primaries are by yours truly.  John I. Blair's half dozen begins with "Bricks" and he adds "Haircut," "Limb," "More Courage Per Square Yard," "Pain," and "Old Fence Lizard" which has an illustration.

Pauline Fayne, the new poet featured this month, is only new to Pencil Stubs Online, not to publication of her work, with "A Farewell for John B Keane," having been published in her book, "I’m Fine Really," Stonebridge Publications 2005. (see her bio).   LC Van Savage published a book of poetry, "LC'S TAKE - POETRY I." back in 1998 and we begged to publish "My Ghost" from it, so we have it also.
See you in April!

Desert Willow in full bloom, May 2008 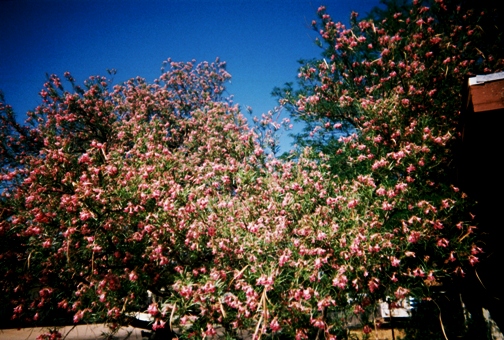