THE FAMINE POT
In 2011, Donegal man, John Cassidy was strolling on the banks of the Clogher River, in the townland of Cullenboy when he found an old famine-pot, broken in pieces. He had it welded, restored and mounted outside Leghowney Community Hall. 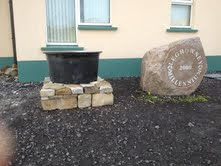 Famine Pot at Leghowney Community Hall.
Such was the interest shown by American tourists that I decided to do some research on the whole Famine-pot/Soup–kitchen aspect of the famine. I found that because of bigotry, pride, misguided patriotism and inherited false information, this aspect of the potato failure was almost air-brushed from our history.
Professor Christine Kinealy of Quinnipiac University told me of how, “ . . .when the potato failed for the second time in 1846 a number of Quakers in Ireland, followed by Quakers in England and Quakers in America decided to do something in the way of direct intervention. And they started to fund-raise . . .“
In November 1846 a Dublin Quaker, Joseph Bewley, wrote to Quakers all over Ireland pointing out the seriousness of the situation. Over the period of the famine the Quakers supplied pots to twenty-seven counties. At one stage, at Templecrone, Co. Donegal, there were in operation four famine-pots, being used twice a day to give out 600 gallons of soup at a cost to the local organisers of £2 10s. 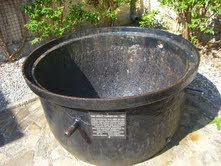 Famine Pot at Rossnowlagh.
I found from Rob Goodbody’s book "A SUITABLE CHANNEL, Quaker Relief in the Great Famine," that the Quakers brought 294 Famine pots into Ireland in the 1840s. “The first major shipment of supplies received from Great Britain in February 1847 included a consignment of soup boilers. These were landed at various places along the west coast, the largest number, ten, going to Killybegs. The supply of boilers was greatly enhanced by the donation of no less than fifty-six of them from the Quaker iron manufacturers, Abraham and Alfred Darby of the Coalbrookdale Iron Company.”
When I interviewed Rob Goodbody, with typical Quaker humility, he insisted that the Quakers weren’t the only group to provide relief. But his book gives facts and figures to indicate that their humanity, generosity and organisational skills saved tens, if not hundreds, of thousands from the mass-grave.
While Donegal was the hardest hit of any county in Ulster there was severe hardship in other parts of the country. Dr Ciaran Reilly of NUI Maynooth points out that the Quakers played a big part in the midlands. “Without them the number of deaths would have been far greater.” Dr Reilly told me that as the famine progressed that other people, “. . . both Catholic and Protestant” got involved in the provision of relief and that some of those set out to line their own pockets. Dr Reilly points out that in the process those unscrupulous people added ingredients not fit for human consumption to the soup. It was at times described as “poison.”
The Government didn’t want to give food free because they thought it would make people lazy so the set up Public Work Schemes. This involved starving peasants, during the harshest winter for a hundred years, doing heavy manual work, for pennies, building roads “going nowhere ” and “famine-walls.”

It didn’t work and in 1847 the Government decided to allow more soup-kitchens, modelled on what the Quakers had already done. But, Professor Kinealy says, th e Government, “ . . . hadn’t really thought it through.” Once again the Quakers came to the rescue and brought in “hundreds of cauldrons.”

Left: Jimmy Deenihan
A documentary is now being made about the whole soup-kitchen/Famine-pot aspect of the Irish Famine. It is due out in early 2014 and it has been indorsed by Minister for Arts, Heritage and the Gaelteacht Jimmy Deenihan who is Chair of the National Famine Commemoration Committee. 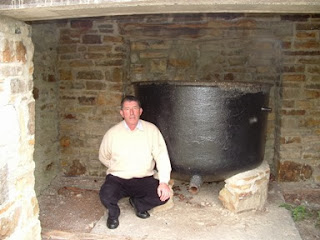 Some famine-pots have survived and can be found in the farms of Ireland. John Cassidy has taken steps to keep this aspect of our history alive. He has arranged to have miniature ceramic famine-pots made. These are now available and details of price etc. are available from John at: johncassidy92@yahoo.com