Always Looking – People Who Made A Difference XII 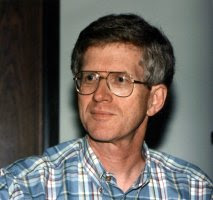 By John I. Blair
Alfred Tredway White (May 28, 1846-January 29, 1921), housing reformer and philanthropist, was known as "the great heart and mastermind of Brooklyn's better self." Forty years a deacon and twenty years a trustee of the First Unitarian Church of Brooklyn, White's reforming work in housing grew directly from his church's social service project and was deeply informed by his sense of religious duty and compassion. In the course of an address he once asked his audience how men and women could understand the love of God "when they see only the greed of men." 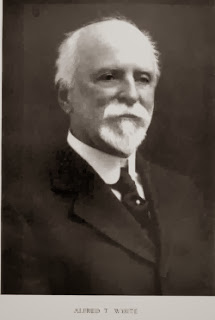 left: Alfred Tredway White
White was born in Brooklyn, New York, the son of Alexander Moss White, a wealthy importer, and Elizabeth Hart Tredway. He earned a Civil Engineering degree at Rensselaer Polytechnic Institute in Troy, New York, in 1865, then returned to Brooklyn and worked in his family's Manhattan importing firm, of which he was later a partner.
Also in 1865, young people in White’s church founded a settlement school. Two years later White began teaching in the settlement school. In 1869 his minister Alfred P. Putnam asked him to superintend the church's settlement work. He did so for the remainder of his life. Almost immediately, through house calls to the homes of settlement children, White became aware of the terrible living conditions of the urban poor. Shocked to find that the death rate in tenement districts exceeded the general rate of population growth, he worked to stop these needless deaths with better housing. "Well it is to build hospitals for the cure of disease," he said, "but better to build homes which will prevent it."

Floorplan for fresh air via outside access
In May, 1878, White married Annie Jean Lyman, a granddaughter of Seth Low, also a teacher in the settlement school. They had two daughters who, like their parents, taught in the settlement school.
Before inaugurating the housing reform movement with innovative, affordable housing for the working poor, White went to England to investigate the housing-reform projects of Sydney H. Waterlow and others. Having learned from their examples and with financial help from his family, he built homes and apartments in Brooklyn for over a thousand families. In 1877 he completed the Home Buildings on the corner of Hicks and Baltic Streets. These twin, six-story, fire-proof brick buildings, with their sunlit rooms, private toilets, and balconies, were "the most advanced tenement houses in the world." Eager that other builders should follow his lead, White made certain his buildings proved that good housing rented to those of limited means could be profitable. In 1878 and 1879 near his first buildings White constructed the Tower Buildings with approximately 170 apartments. 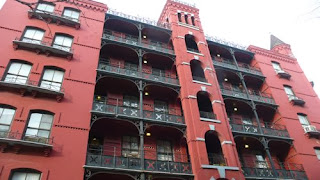 Tower Building
In 1890, closer to the waterfront, he completed the nine Riverside Buildings, his greatest achievement. Far ahead of its time, the project had its own park, playground, bathhouse and music pavilion. None of his buildings occupied more than 52 percent of its lot. White's projects, the great social reformer Jacob Riis insisted, were "like a big village of contented people, who live in peace with one another because they have elbowroom." White's buildings and the publicity he gave them in his writings and lectures helped pave the way for enactment of New York State's 1895 tenement legislation, requiring that a new tenement occupy no more than 65 percent of its lot. By 1900 White was a leading member of the New York State Tenement House Commission. 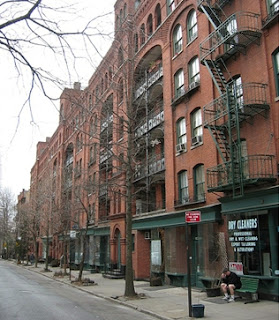 Riverside Buildings
In 1876, while completing his first tenement houses for immigrant families, White moved the First Church's settlement school into its own building, the Willow Place Chapel. There the school started a kindergarten and, with the help of Pratt Institute, became a leader in preschool education. In 1906 classes and settlement clubs grew when a second building, Columbia House, was added. An early member of Brooklyn's Children Aid Society, White built for that organization the Sea-Side Home on Coney Island in 1876, the first facility in the country where poor children could receive medical care and nutritious food in a vacation atmosphere. Credited with cutting Brooklyn's infant mortality rate by half, White was also a founder of the Brooklyn Society for the Prevention of Cruelty to Children. In 1878 he became the co-founder of the Brooklyn Bureau of Charities and was either its president or secretary for thirty years. White was so involved in settlement and charity work that he returned to Brooklyn from summer vacations in New England every third week. In 1893, while commissioner of public works in Brooklyn, White built the Wallabout Market which lasted until the nearby Navy Yard expanded during World War II. To bring flowers and woodlands to city dwellers, he made the Brooklyn Botanic Garden a reality in 1910 and until his death helped it through every financial crisis it faced.
White's concern for education and training reached out beyond Brooklyn. He was a major supporter of Hampton Institute, where Booker T. Washington was a student, and of the Tuskegee Institute which Washington built. Tuskegee Institute "would not have been possible," Washington said, "had it not been for the encouragement and inspiration I received from Mr. White and his family."
In 1880 Francis Greenwood Peabody, a minister and Harvard teacher, came to Brooklyn to see White's innovative housing. They were friends for 40 years. White endowed a chair to ensure that the teaching of social ethics at Harvard, which Peabody had begun, would continue. Designed to teach economists their moral duty and philosophers economic reality, this course was duplicated in other colleges, bringing White's ideas for reform to generations of students. In 1890 Harvard University awarded White an honorary doctorate.
During and after World War I White made generous anonymous gifts to desperately needy churches in Transylvania. He was later given the Belgian Order of the Cross for sending money to ravished towns in Belgium and working with Herbert Hoover's Commission for Relief in that country. White was a charter member of Survey Associates, an original trustee of the Russell Sage Foundation, and on the first executive committee of the American National Red Cross.
While skating across Forest Lake, White, an active outdoor man, fell through thin ice and drowned near Ramapo Hills, New York. Calling White the "great parishioner" of Brooklyn's First Unitarian Church, former President William Howard Taft lamented his loss, saying, "I don't know any other one in all that six millions of New York City who would leave such a void as he does."

Adapted from an article by Olive Hoogenboom

Blair adds, "The floor plans (see pic below) are interesting


Click on John I. Blair for bio and list of other works published by Pencil Stubs Online.