Part of the ritual, going home from Lacken School, had been, for generations of children, to run down the top of the ditch at “Ridd’s Green” or the “Clorenáán” as the old people called it. We learned, in later years, that it was, in fact, a “Cillin” where unbaptised babies were buried, usually under cover of darkness.
According to the National Monuments Trust there are about 1,400 such burial-places in the country, some dating back to 700 AD.
My friend the poet P.J. Kennedy wrote a poem about such places titled,


”Buried Unknownst”
I stared at a crowd of stones
In the corner of a hilly field.
Like children away from home
The stones seemed put about.
Some grouped, some alone,
Some leaned, some low with the damp.
All dressed in moss
With a trim of grass.
` The ones in the ring of rushes, like a set dance.
Brown heads at the back, noisy.
Black heads jostled at the far side.
The blonde near the buachalán bui.
The stone with a crown of fossils,
I saw his curly hair.
Brothers holding hands,
They were the eldest and the youngest,
So the neighbours said.
Twins shared their scarcities,
A granny said,”There’s nothing to be ashamed of.
They were laid out in silk
The size of a handkerchief.
The lone stone, shy,
Minded the child that came unknownst.
Unknown stones with dimples
That could hold a thimbleful of tears.
Wisps of cocksfoot grass shelter them all,
A bandage of briars against the hill
Keeps livestock away.

OILEÁN NA Marbh (the island of the dead) off the coast of County Donegal is one such Cillen where, there are a reputed 500 unbaptised children buried. The island is accessible by foot twice a day at low tide. In a radio interview local man Seamus Peter Doyle said, “ . . . Ye’ll find the wee heights and hollows in it.” Seamus went on to say that some people didn’t want to know about it, ” . . . want to forget about it more or less.”

As one writer put it, “Even the coldest heart will feel for women around Ireland who were enjoined to grieve silently as their babies were taken away at night for burial beside a cemetery wall, or for the disconsolate father who had to walk across to Oileán na Marbh at low tide to lay his child to rest.”

A Cork man, Pat O ‘Neill, recalled how as an eight-year old he had witnessed four men burying a baby in a Cillin and how it affected him, adding, “Can you imagine what that mother went through?”
According to Roman Catholic theology, Limbo was an afterlife realm between heaven and hell where there is no punishment but where souls are denied the presence of God.

As far as I know it wasn’t An Article of Faith (It wasn’t a Mortal sin not to believe in it) but it was taught in the Catechism. It wasn’t mentioned in the Bible but in the Middle Ages, one or more Theologians came up with the idea that there were, more or less, two Limbos. One held souls of Old Testament patriarchs who were liberated by Jesus after the Resurrection; the other contained the souls of babies who never were baptised and freed from original sin.

The concept of the first caused little or no concern for the past two thousand years but did anybody stop to think about the worry caused by the belief in the other Limbo? It is hard to imagine the distress of the parents and family of an infant who died without Baptism who believed that the soul of their loved one was in such a place. Church authorities eventually copped on and the concept was dropped from the official catechism in 1992.

In 2004 Pope John Paul II appointed a commission to study limbo, and in 2007 it issued its findings. Signed by Pope Benedict XVI, the report stated that it reflected a "restrictive view of salvation" and that it is reasonable to hope that the souls of unbaptised infants are admitted to heaven by a merciful God.

So, the Cillin in your area is a reminder of our unenlightened past, of what Brendan Graham author of that haunting song, Crucán na bPáiste, called “other darker days.” But it is also a monument to centuries of heartbreak. (See one grave marker below.)

Thank God we live in an age of more progressive thought. 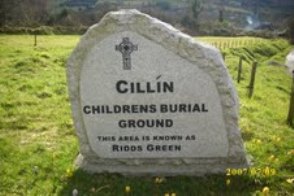