It was Halloween at the Harbor Tower, it was also Bingo night
Bingo was canceled, because something wicked was causing a fright
Bingo cards were glowing, and flying across the room
There was a crazy witch lady, riding on a broom

Where she came from, nobody really knew
On her broomstick, oh yeah, she really flew
Nobody knew what she wanted, or her demand
Only one person, was brave enough to stand

He stood there, trying to figure it all out
Then he heard his name, Earl gave him a shout
“Charlie, watch out, she's coming your way!”
Charlie thought fast, he didn't want to stay

“She sure knows some good tricks” Charlie said with a grin
As the people watched her, the witch did a little spin
She wasn't ugly, but she wasn't very pretty
Everyone could tell, she sure as heck was witty

Then the witch disappeared, in a cloud of smoke
A voice was heard saying “Is this some kind of joke?”
Everyone kept watching, to see if she was coming back
Kat just smiled and said, “I'm going to the Smoke Shack”

The following week Bingo returned to its normal routine,
and everyone showed up, and it was a great time for everyone.
The witch wasn't seen again. Maybe next year she will visit
West Highland. 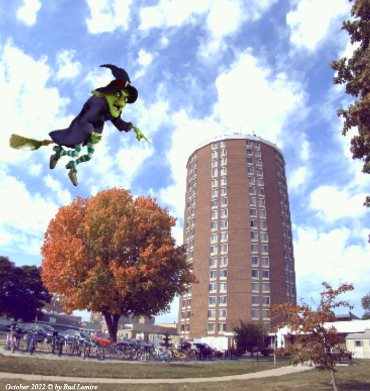